The late 1990′s for me was the heyday of my experience with Japanese RPG video games. Final Fantasy 6 and Chrono Trigger remain touchstones for me, in terms of their accomplishments in both narrative and gameplay mechanics. I could mention numerous other games I remain fond of for various aspects of their design: Secret of Mana, its underrated successor Secret of Evermore, Final Fantasy Tactics, Wild ARMs, and many others. 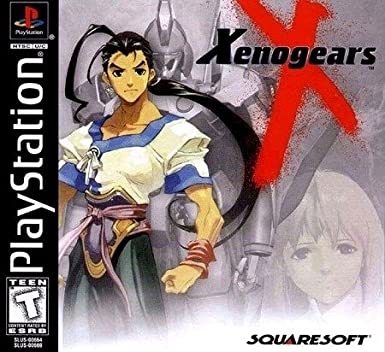 This period also contained a game called Xenogears, the brainchild of game developer Tetsuya Takahashi. Far from holding it in high regard, Xenogears was a game I wanted to forget.

The first major problem with Xenogears was its story. Long time readers of this blog will know that narrative is very important to me, and it is particularly irksome for me to see it done poorly. Xenogears is a sprawling epic, taking some 50-60 hours of play to complete. One basic storytelling principle is that the events of a story need to cohere to one another. Each event should be related to at least one of the others in some way. Xenogears remains the sloppiest, most incoherent game narrative I have ever experienced. Most of the story events don’t seem to have any relationship to any of the others, and the main characters move from one area of the game to the next without much sense or reason given as to why anyone is doing any particular thing. The dialogue resonates of great sturm and drang about the narrative’s fantastical events, but nowhere is there any sense of how any of them relate to, well, anything at all. In the final segment of the story, the game gives up on narrative structure entirely, and text boxes narrate the events of the game at you, rather than letting you experience those events as part of the game.

The whole “narrative-as-random-bag-of-incoherent-events” is very much a Japanese RPG phenomenon, and even some games that I love, such as Final Fantasy Tactics, possess this problem to a degree. But Final Fantasy Tactics at least has its status as the second tactical JRPG ever to fall back on, not to mention the fact that its gameplay is ridiculously fun. Xenogears gameplay was as much a sloppy mess as its narrative, and many of the game’s battles were mechanically unbalanced.

So, Xenogears not only managed to be a ludicrous narrative catastrophe with hour-long sequences of nonsense text boxes, but it also achieved abysmally poor gameplay mechanics with fundamental balance issues. By the time I reached undergrad in the early aughts, I was using the game as my example of “worst at everything” when describing JRPGs.

Around this same time, Takahashi broke away from game maker Square Enix and formed his own studio, Monolith Soft. There, he started making a successor series to Xenogears with the same thematic concepts at its core. The Xenosaga series, as its name suggests, was to be another epic story, this one properly spanning six games, rather than being crammed and mangled into a single game. 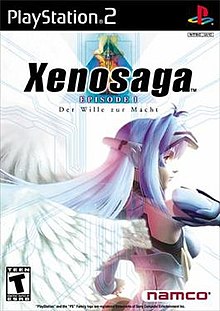 I decided to give Xenosaga: Episode 1 a try and was pleasantly surprised. The gameplay mechanics were solid, and the narrative interludes were better balanced with the gameplay. The game was still narrative-heavy, but at least there were better designed dungeons to break up sometimes long cinematic sequences. While it wasn’t a phenomenal game, I could at least say it was fun.

Unfortunately, Xenosaga: Episode 2 was a step backward. The hours-long narrative cutscenes returned. The rambling, incoherent plotlines made a comeback, too. Mechanic design mistakes made dungeons and battles a chore. I was fully and thoroughly done. When Xenosaga: Episode 3 came out, I paid just enough attention to it to find out if all the same issues were still there. I discovered that they were. The Xenosaga series was then aborted after being only half complete, and with that I thought that my days with all things made by Tetsuya Takahashi and Monolith Soft were at a close.

Sometime around 2012 or 2013, I first heard about Monolith Soft’s new game, Xenoblade Chronicles. I dismissed it outright. I wasn’t about to go there again. At the time I was still reeling from Final Fantasy 13, the game that was so bad, which I felt had so sullied one of the touchstones of my childhood, that I had enacted a personal ban on all things developed by its maker Square Enix. I wasn’t, at that time, in quite the right mood to give a shot to a franchise that I had come to loathe.

Fast forward to early 2022. By this point, my attitude towards Square Enix had changed. In 2019, I had played Octopath Traveler, which, despite the goofy name, is a glorious example of what JRPGs are capable of achieving when executed well. I had grown more willing to get out of my comfort zone in terms of games, which for a large chunk of the twenty-tens consisted of innocuous open world games like Minecraft and No Man’s Sky. Bummed about the state of narrative art in JRPGs, I sought refuge in non- or minimally-narrative games.

And this brings me back around to Xenoblade Chronicles: Definitive Edition, released in 2020 as a warm up to this year’s highly anticipated Xenoblade Chronicles 3. The definitive edition is essentially the first game with updated graphics, re-orchestrated music, and one notable new gameplay feature. 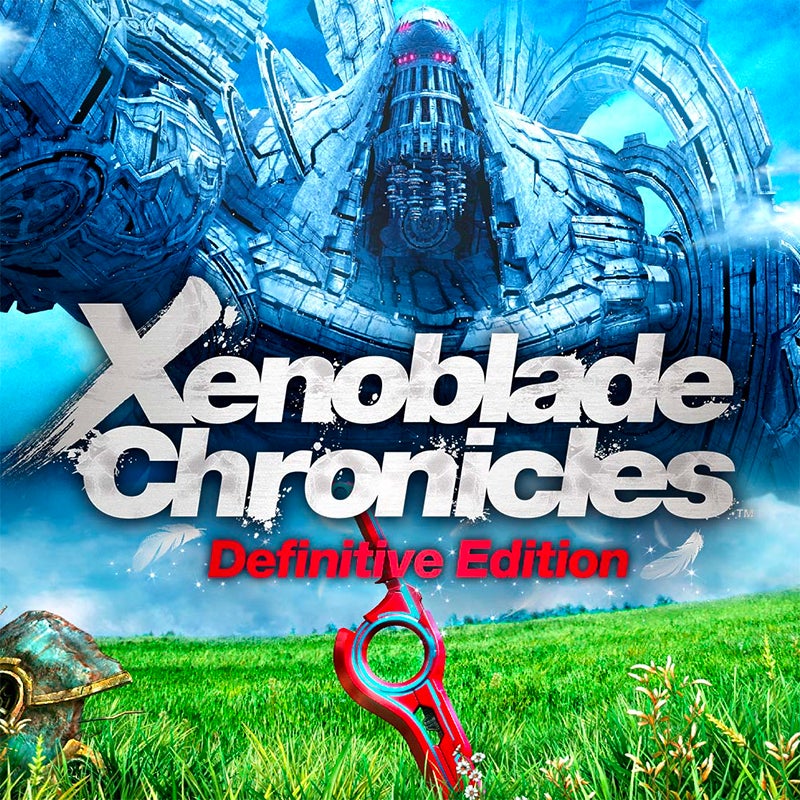 I was pleasantly surprised by all aspects of my experience. Far from being an incoherent mess, I give Xenoblade Chronicles excellent marks in narrative cohesion. I couldn’t spot a single non-referent (an event that has no relationship to anything else in the story and is never explained in its own right) or broken referent (an event whose content conflicts with some other event and is not resolved before the end of the story).

The content of the narrative is typical Takahashi fare. An individual who has played previous Xeno games will immediately notice his signature themes, all of which come from Judaic, Christian, and Buddhist theology: gods and their power, fate and destiny, cycles of death and rebirth, the cosmic struggle between good and evil, etc. The one narrative highlight is the reveal of who the final boss is. I found that particularly well done, especially given Takahashi’s signature themes. The rest of the story is not particularly stunning in any aspect, but it is far from bad. Individual lines may occasionally grate, but the overall experience is well executed. In my entire experience with the game, I found only two story segments to be downright clunky, but at least in a hilarious rather than a cringey way. My favorite of these was when a non-playable character announced he was leaving my party and going back to the nearest city because he’d realized how “useless” he is. After making some vague attempts to dissuade him, the main characters affirm his assessment and send him packing. (Readers who are wondering just how hyperbolic I am being, can, if they are interested, watch the actual scene and decide for themselves.)1

Fortunately, such affronts are few and far between. Takahashi seems to have learned his lesson in terms of a crucial aspect of design for narrative-heavy games: The game must find a way to oscillate seamlessly and frequently between story and gameplay, with neither aspect overwhelming or subsuming the other.

Chronicles does also deliver in terms of gameplay. The core game mechanics are by no means perfect, but they do represent a huge improvement over past Xeno franchise titles. During battle, the characters will sometimes see a vision of a devastating enemy attack to come. The player must must then use that information to change the outcome of events. The execution of this feature is superb, and it ties in with the thematics of the narrative. The character affinity and collection mechanics are also welcome innovations. However, the same affinity system is also applied to non-playable characters and geographical regions, in which case it acts as a kind of gate for quest unlocks. This mechanic decidedly created more confusion and hassle than it was worth. However, as a whole, Xenoblade Chronicles is strong in both narrative and gameplay, and it balances both aspects very, very well.

It is interesting to me that the JRPG player who convinced me to give this game a shot was himself unburdened by any history with the Xeno franchise prior to the first Chronicles title. It is a good lesson for life. Our history and experiences can be powerful tools to help us better understand the world around us. They can also be the basis for prejudices. Every human being has the capacity to change, to adapt, to strive to become better. The major theme of Xenoblade Chronicles is just that, its main characters fighting to ensure all of the people of their world remain capable of exercising the will to do better than they have done and to become better than they are.

It is a theme powerful not just in its own right, but also poignant in its placement within the franchise as a whole.

1 The other scene was when one of the main characters is told by his village elder that he needs to go adventure with the other main characters because this will somehow help the village feed said character’s seven children. His wife and children promptly tell him to get lost, yet the whole scene is staged to feel endearing. Again, anyone who thinks I might be overstating my position can watch the original scene and decide for themselves. And to be clear, these are only two sequences in an 80-hour game, so these scenes represent the exceptions rather than the rule.