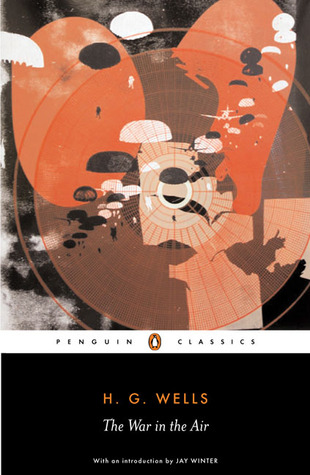 In 1907, H. G. Wells wrote a novel called The War in the Air. At the time, flight was only in its infancy. On a superficial level, the novel represents Wells’s extrapolation of how aircraft would change the nature of warfare. He describes a fictional “future” world of 1915 in which a worldwide war is waged involving bomber zepplins and smaller, gun-mounted aircraft. However, if the novel were merely about the advent of aerial warfare, the novel would remain largely uninteresting today. As it happens, the text’s real substance in about the changes in society Wells perceived, how those changes would shape coming wars, and the danger that those changes, in combination with the technological might of advanced weaponry, risked obliterating the tenuous social and technological progress, which many believed (and still believe) to be a new stable state for humanity. Although the twentieth century produced aerial warfare implements and logistics far different from those described by Wells, it is not entirely clear that we have evaded the social danger he describes. In fact, a good argument could be made that we are encroaching on the swift and calamitous fall he predicted over a century ago.

The novel is narrated by a pseudo-omniscient narrator from a future time in which technological progress and social stability have been achieved. That narrator describes the events of the life of one Bert Smallways, a young man from London of 1915, who accidentally gets himself caught up in the military expedition that begins the eponymous aerial war.

Smallways’s family name is intentionally chosen. At the beginning of the book, he and his brother fumble through the running of two business ventures, manage to bankrupt themselves, and Bert then comes up with a plan for them to make money singing and dancing.

Wells, via his omniscient narrator, is direct about his opinion of Bert’s situation. Although his behavior is, on one level, ridiculous and self-serving, the real culprit, Wells believes, is Bert’s society, which has trained him to care only about finding himself a successful commercial venture and accumulating profit. His education has not prepared him to think about any contexts broader than his own immediate gratification, and when the news around him begins to emit warnings of impending military conflict, Bert’s reaction is that he can’t be bothered to care about all that. He has a business to run, and when the rare bank holiday rolls around, he wants to enjoy it.

Slowly, over the course of being accidentally transported to Germany, then across the Atlantic to New York and finally Niagra, Bert is forced to harden into the kind of man capable of taking war seriously. The novel’s final depiction of Bert is chilling. With all civilization destroyed and no hope of any social infrastructure to enforce law and order, the new Bert takes what he wants and creates his own order by brute force. The allusions of Odysseus’s return home are apt, but unlike in the Odyssey, where the conclusion at least puts the characters back into a situation that is, for them, normal, those parallel events represent, in a pseudo-modern context, a world that has lost its social order.

In a world where war is aerial, where land and sea no longer dictate the forms of ‘war fronts’ or provide natural boundaries, war continues endlessly, and the individuals on the ground become further and further abstracted from the process of governments blowing each other up to wrest power from one another. In 2020, the reality of drone warfare and cyber-warfare seems a kind of hypertrophied realization of Wells’s concern, although we have yet to experience the complete social collapse he believed such advances would entail.

In places, the novel grates stylistically. Some events, which could have been much shorter are elaborated in excruciating detail (most of the details of aerial warfare and Bert’s time aboard the German airship), while others, which seem worthy of greater detail get a scant few lines. The omniscient narrator, in my opinion, does not work very well, and is used to beat the reader over the head with thematic information that a savvy reader could derive themselves. Despite these problems, I rank this as one of the stronger Wells novels I’ve read.

The most interesting element of the novels for me was, in fact, the author’s prefaces to previous editions. Wells wrote two. The first was written in 1921, which he included as a way to give context to readers who were coming to the novel having had the experience of the first world war. The second was written in 1941, an interesting year indeed for a novel about the impact of social and technological changes vis-a-vis warfare. Wells wrote in 1941 that he was including the 1921 preface, and that beyond that, he desired only to add his “epitaph”: “‘I told you so. You damned fools.’ (The italics are mine.)”