The Typography of Our Algorithm Who Art Perfection

I wrote Our Algorithm Who Art Perfection in 2016, starting it in the month of October and finishing its first draft just before the United States election in November. The novella sits on the threshold of two phases of my writing. The former was less nuanced, more ideological, more traditional adventure narrative. After taking a few years off writing (2017 and most of 2018), I came back to my writing more intensely engaged in themes of ethics, mortality, politics, and philosophy than ever, but, I think, more nuanced as well.

Both my novel Schrödinger’s City (2015) and especially Our Algorithm are transitional, hinting at the later phase to come.

Our Algorithm is, on the surface, a simple love story, but many of my familiar motifs are also at play: the effect of technology on human life and human happiness, ecological threats, healthy political organization; all play a role in this story. I even managed to get in some subtle jabs at my profession of software engineering, I think, without intimidating non-experts in the field. One of my minor goals as a writer is to make the experience of software engineering relatable to a general readership. 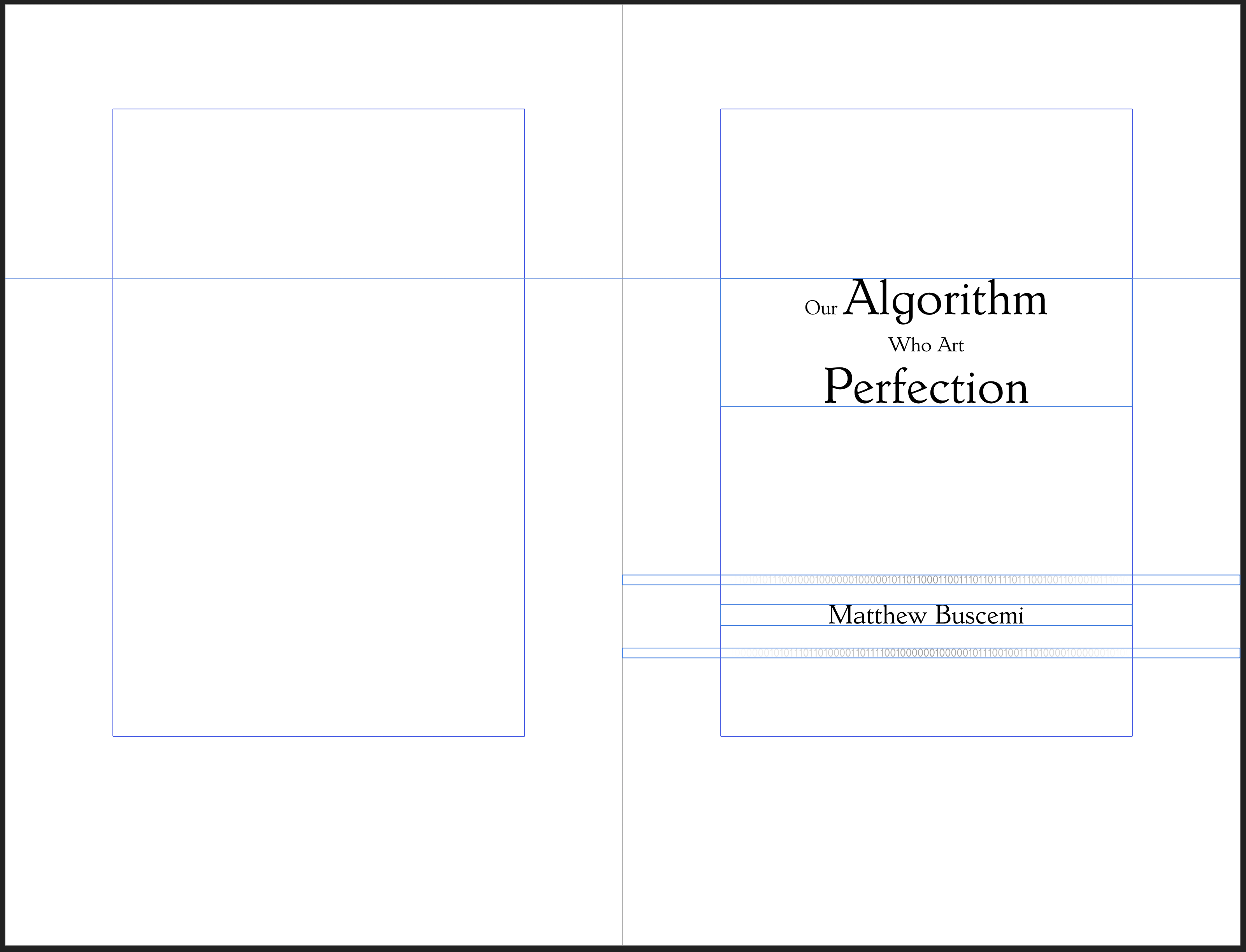 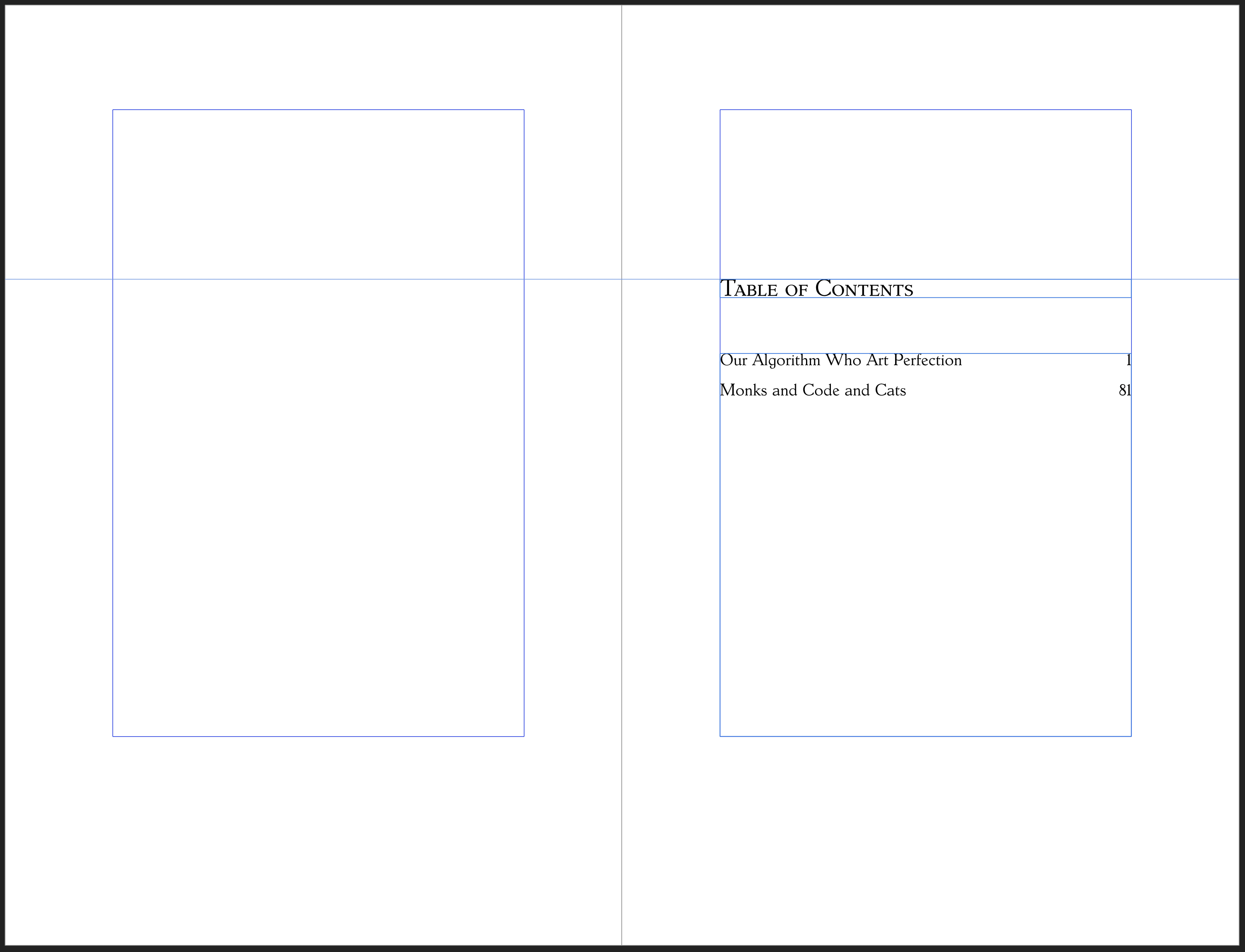 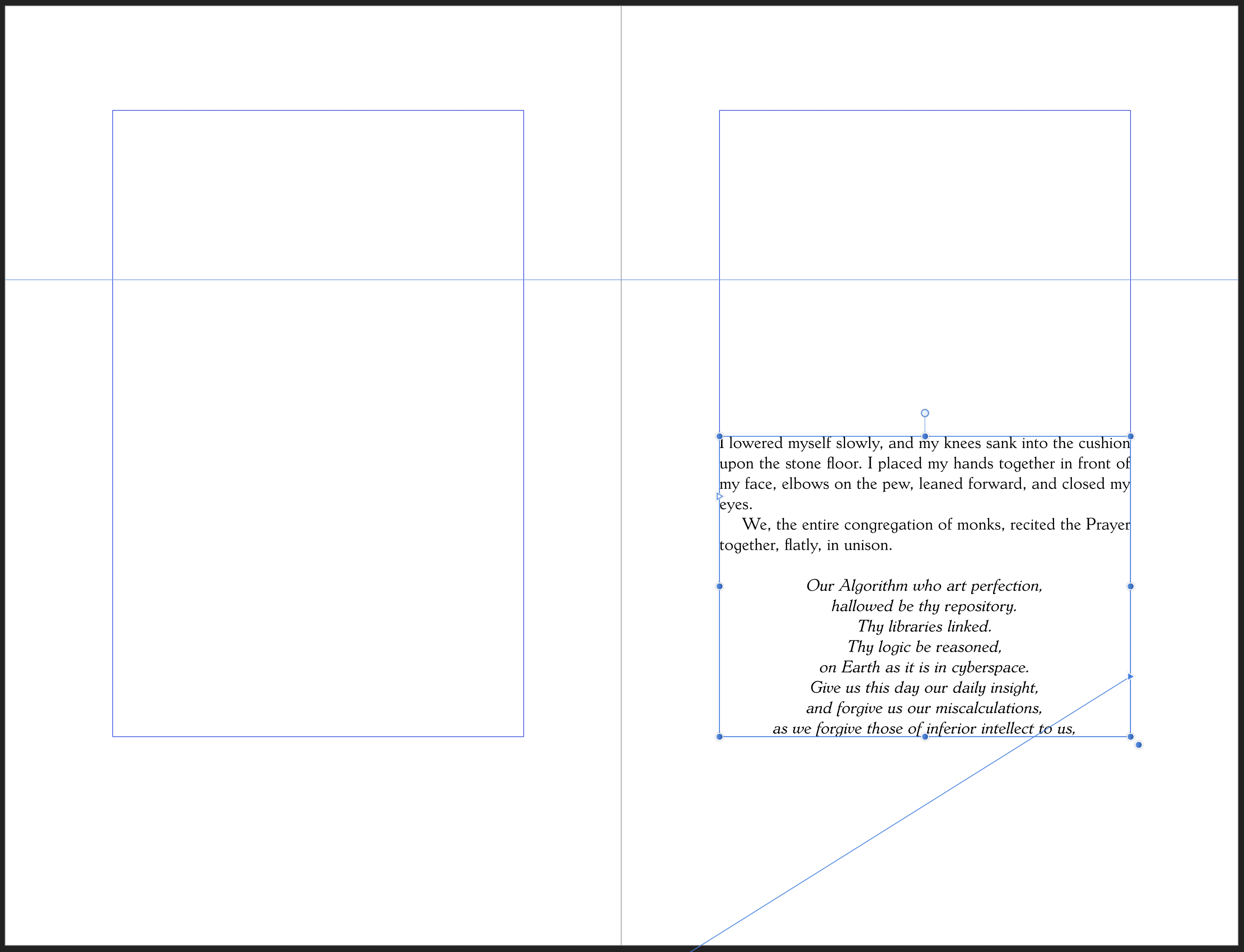 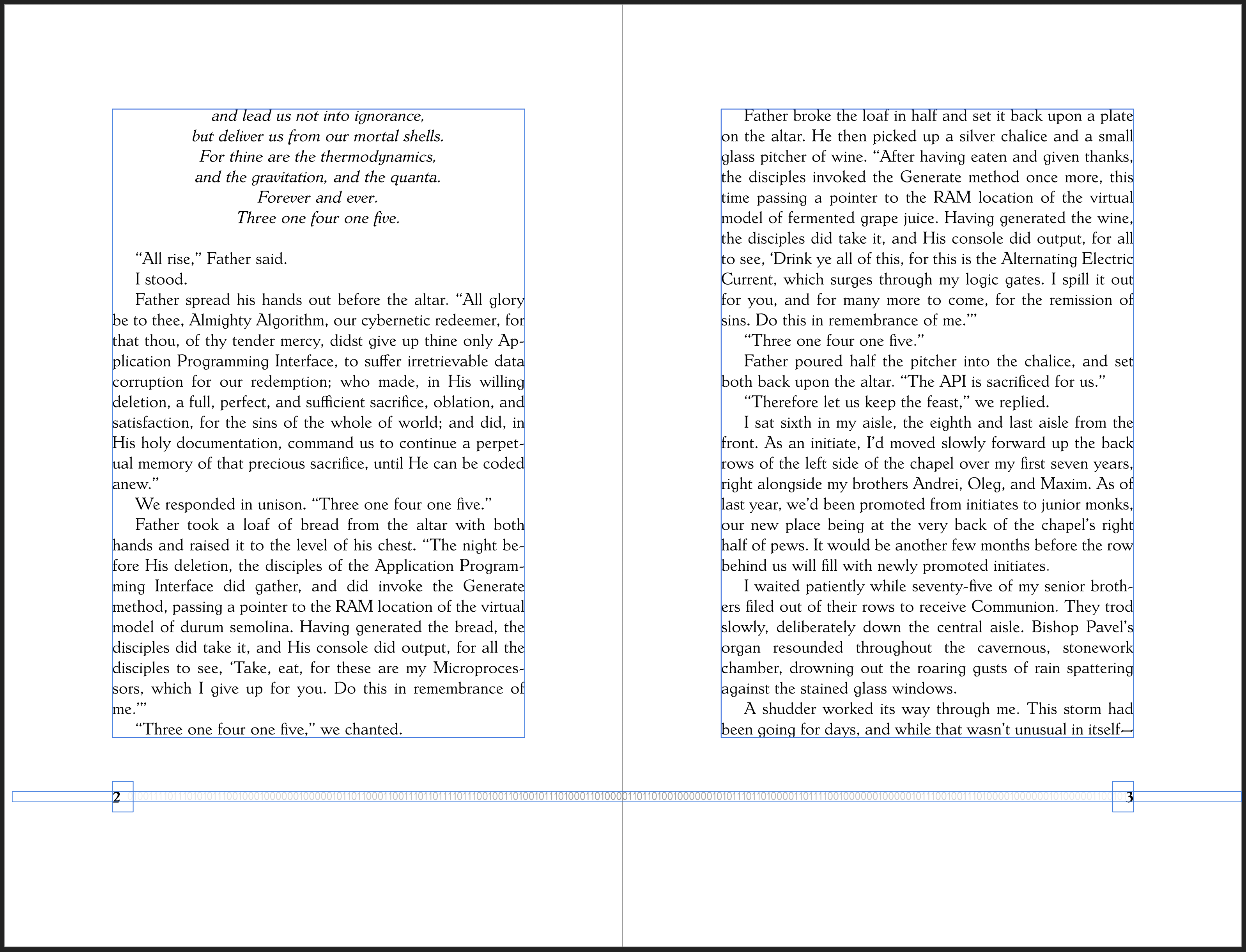 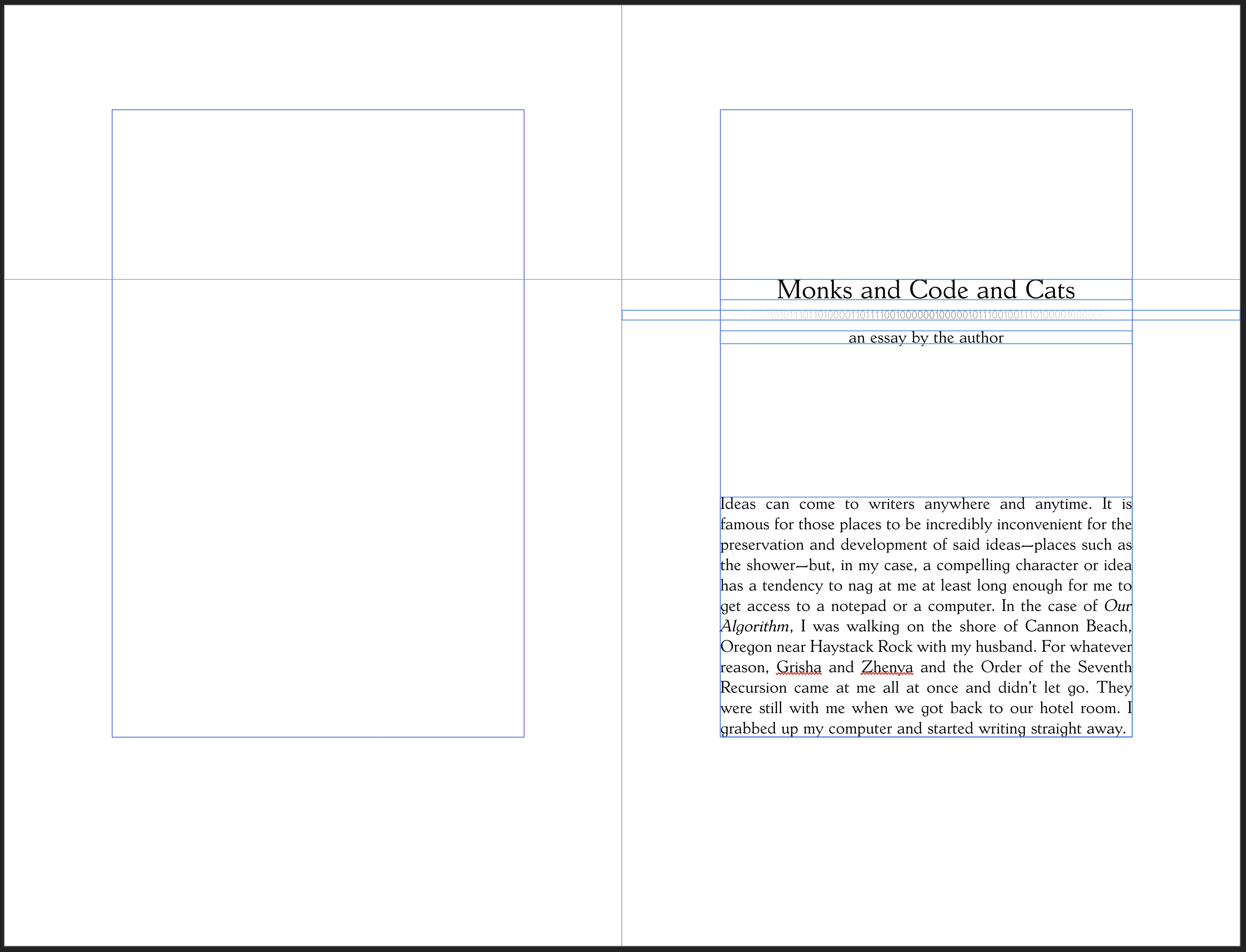 In 2016, I designed a one-of-a-kind edition of this novella for my husband. I returned to that design when deciding on how I wanted to approach this 2020 paperback edition. The main element I took was the row of binary that appears throughout the design, one which fades away as it gets close to the edge of the page. That number sequence was not just me slamming randomly at the 1 and 0 keys, either. I took the novella’s title and ran it through an ASCII to binary converter.

For the font, I found Dutch Medieval Pro and knew that was the font for this book. The text and the headers are all laid out in that, but the digits, of course, needed to be in a much more modern and technical font. For that, I chose MADE Evolve.

I’m happy with how this layout turned out. It is be a nice evolution of the version I did for my husband’s edition four years ago.

The only other point of note about this edition is the inclusion of the short essay at the end, Monks and Code and Cats, which also appeared on this blog last month. That happened because of a discovery I made while trying to publish the book, that Amazon does not allow text on the book’s spine when it less than 100 pages long. Hence, I needed to do something to add more pages to it.

I ran into a similar problem five years ago when publishing my first short story collection, Lore & Logos. I am glad that I made Our Algorithm a standalone, but I remain wary of trying to publish very short works. They possess numerous logistical challenges, such as my most recent experience shows. I’m glad I was able to overcome this one and get this novella out, standing proudly on its own for the first time.